With Love from Rovaniemi

Woke up in a hurry yesterday morning around 4:39am (hit the snooze button only once!) as Adam had to get me to the Newark train station by around 5:35am for my trip to King’s Cross in downtown London, where I would get the Picadilly Line out to Heathrow Terminal 3. Lady and Daisy were a little confused as to why we were up after only a few hours’ sleep, but nonetheless, were eager to play and receive attention! Muffin on the other hand, took a while to rise and was ready for his biscuits! We jetted to the station, and after a quick good-bye, I hopped the train to London.

Met Sarah, a very nice young lady who was traveling from Canada for the past month, and was living with her brother in London. She enjoyed her time in England, and was eager to travel again soon. It is always nice to chat with someone who loves to travel; nothing like some adventure in your life! I arrived at Heathrow, and entered the ‘G’ location to find the Finnair Airline counter to drop my luggage and get my boarding pass for the 10:20am flight to Helsinki, Finland. I had some time before boarding, so I purchased some sushi, did some quick shopping and a few Facetime calls before boarding. 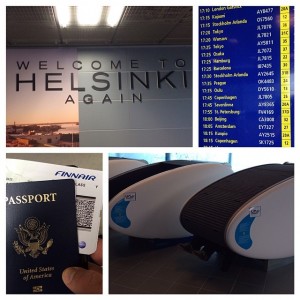 I arrived in Helsinki to a beautiful layer of snow (which was not present in England, as it was quite warm) and a fresh chill in the air. We exited the aircraft and boarded a quick tram back to the terminal. I left my coat in the checked bag, so I was in a t-shirt (got a few looks!) but carried on just fine. I found counter ‘31e’ where I would be flying out of, then had about 45-minutes to walk around. I was amazed by the ‘Relaxation Center’ which gave passengers the opportunity to lay down and sleep in what looked like ‘cubby holes’, or a ‘pod’ they could lower the sliding roof and take a nap. It reminded me something out a science-fiction movie, but if I had more time I would have definitely taken advantage of it! Met Emma Brown from England who was on the same flight, after overhearing someone speaking to me about swimming; naturally when they find an American traveling in this part of the world, they wonder why I am there, ha! She was heading to Rovaniemi as well for the swimming, and was ecstatic to be on holiday in Finland. 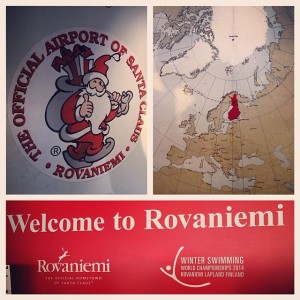 After arriving in Rovaniemi, we were greeted at the airport to sights and sounds of Santa Claus, reindeer and another incredible winter scene! The city is the ‘official home of Santa Claus’ and they are very proud of the blessing. We took a quick bus from the station, and dropped passengers off one-by-one at the hotels throughout the city. I made some Russian friends, and found that their daughter would be doing the 25m ice swim in the Championships! How awesome that someone so young wants to swim in such cold conditions; what a warrior! See, Russia and the USA can get along just fine!! I was last to be dropped off at ‘City Hotel’ which turned out to be one of the nicest hotels I have stayed. The staff is awesome, the breakfast this morning was immaculate and they are allowed me to stay until 1pm in the room before I have to go find the home we are staying for the remainder of the time in Finland – very grateful for their service and kindness! Went out last night for a walk around (-7C temperature) and found a pub to relax and watch some soccer while enjoying company with Emma. We said our good-byes, and I took a quick stop at Subway (yes, they are all over the world; pretty sure I’ve been to one on each continent!) and had the American Steak and Cheese! Turned in for the night, and awoke to a sun rising up over the horizon, and the perfect breakfast of veggies, eggs, bacon, fruit, juice and coffee. 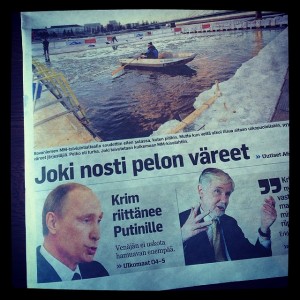 I walked out of the hotel and down along the Ounaskoski River, and across the Kajaanintie bridge to the site of the Winter Swimming World Championships – what an incredible sight! Tractors were carrying snow, and carving seats by means of steps up from a pool which was formed from the ice surrounding the Ounaskoski River. I did notice it was flowing as I crossed the bridge (a few spots had melted) however where we are swimming, there is not a flow of water. I met some more Russian swimmers, as well as the kind people who were forming ice sculptures around the pool. The pool itself has a wooden structure on each end where you can do your turns (both relay and individual) and has 9-lanes, including ladders for entry as there is no diving allowed. They had a boat in the middle where they were continuing to scoop out ice, and had pumps that were flowing to keep the water moving – can’t let the ice cover our beautiful, toasty pool! Went back into town and found a great pair of warm ski pants and sunglasses before checking out of the City Hotel. I took a cab ride (they drive Mercedes-Benz cabs over here) to the Guesthouse Borealis (www.guesthouseborealis.com) where I settled into our apartment (there will be 8 of us living here) where I will be staying for the next 6-days. Awaiting all the friends to arrive, so we can go get food and have our first feast in Finland tonight! 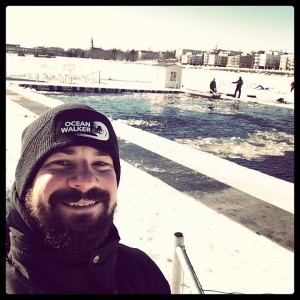 With love and respect from Rovaniemi,