‘Take Off Your Clothes. Get To The Water’ 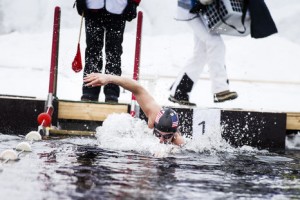 Saturday marked the first day of competition for me, and it started with a breakfast at the Guesthouse Borealis with the team. We took the taxi over to the competition and each of us got set to compete in the 25m and 50m freestyle that day; my first experience sprinting in cold water! When it came time to report, the swimmers would enter an area of trailers which safely housed our belongings while we entered the staging area before we walked out for the competition. I was assigned to ‘Trailer 3’, and entered to be met with different swimmers speaking many different languages, yet we all were excited and ready to get going. I recognized Team Australia, a few Russians, a Polska swimmer and Matias who was in my heat for the 25m sprint. 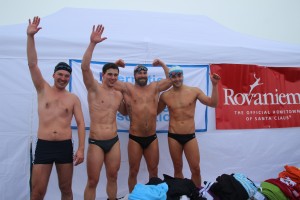 We had about 15 minutes to ready ourselves before we left back into the cold and walked down the snowy hill to the staging tent where we had to sit in our respected chairs to correspond with our specific heats. Every minute or so, we would edge up another row before hearing the final call to exit the tent and walk down behind our lanes. Over the past few days, I had got to know many of the swimmers, so it was always fun getting to clap, cheer and motion signs of encouragement for everyone getting ready to compete. There were all different levels of ability, but I was shocked as to the amount of skill that was at the competition – some of these guys could really move in that freezing water!

Our heat was called, and we arose to walk outside the heated tent to the loud roar of the crowd as they cheered on their swimmer. It was pretty intense, as I felt like I was walking out for a collegiate competition, but then was quickly reminded I was in the Arctic Circle about to spring in water that was just above freezing! There was so much excitement in the air, and the familiar sound of “Take off your clothes” rang from the loudspeaker. If you could imagine Arnold Schwarzenegger announcing the starting commands, then you can picture the way it sounded to the rest of us. As I undressed to feel the quick sting of the snowy landscape, we had a few seconds before hearing “Get in the water” (hearing these commands never got old) and we eased down the ladder and into the pain of 32-degree water. I don’t really recall feeling the pain through, because I was so caught up in the moment that I hardly had time to think. We had to keep one hand under the water, as we placed our feet on the wall, had one hand on the ladder and the other out in front. I was in Lane 1 for this swim, and it was made known to me to “make sure you swim straight” as I didn’t want to wrench my arm off the ice to the left of my, nor the string and buoy lane rope system which was particularly difficult to see. Many people had difficulty with this, as I was constantly seeing people zig-zagging down the lane. The final command, “Swimmers ready” was given and the starting bell blew. 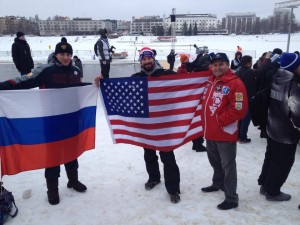 It all happened so fast, I just remember pushing off (we were not allowed to streamline, so it was a quick get up and go) and began swimming as hard as I could. Again, I didn’t seem to notice the pain, however I remember feeling a little uncoordinated with my stroke due to the fact I couldn’t really feel my arms due to the cold! I slammed the wall pad at the other end, and quickly exited the pool. I shook hands with the Russian, Argentinian and Polish swimmers, and was asked to have a few photographs taken, and then was interviewed for the local paper along with Matias from Argentina. We made the entire back page of today’s paper, and I was stopped a few times by people who recognized me from the article about my charity work and the completion of the ‘Oceans Seven’. I then had some warm red berry juice, and crawled into the tight hot tub with all the rest of the freezing swimmers! Now this was a great time! Everyone was so excited about being completed with their race, that everyone was going crazy, their fans were down close chanting their names and even a flask of homemade whiskey was being passed around from the Polish crowd (they loved me since I told them of my Polish heritage) and treated me as one of their own. I walked up to the changing trailer and put my clothes back on, and prepared to ready myself for the 50m freestyle in about 2 hours’ time. The process was repeated for the 50m freestyle, however on the second lap I could feel a more intense feeling from the cold, however nothing I could not overcome. This time I was lucky that I didn’t have the ice on the side of my, rather I was smack dab in the middle of the pool in Lane 5. It was two incredible experiences for me that day, and I couldn’t believe where I was at, and where I was competing! I cannot say enough how amazing it was to compete against such a diverse group of international swimmers! 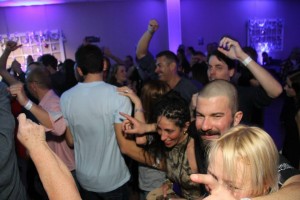 Saturday night was the Gala Dinner at Hotel Santa Claus, and needless to say I came a little unprepared because I forgot to pack my dress shirt and blazer. Needless to say, we had a wonderful evening, and dined on reindeer, salted salmon, potato mixture, baked salmon, simply salad (with crème) and a few other dishes that didn’t have titles, but incorporated vegetables, more potatoes in a form of ‘stew’. Brad and I sat with the English ladies and engaged in a great conversation about open water swimming in London, as they were all new to the sport. We then went to the main room and went to the front table where the event organizers and I had a chat about our desire to start a program up in the States for winter swimming, as there is currently no form of organization for winter swimming in the USA. Was introduced to many more wonderful people, and watched presentations from the Chinese, Russians and Finnish people on winter swimming; including in Tyumen, Russia (Siberia) where the 2016 Winter Swimming World Championships are going to be held! After dinner, we all went downstairs for the party and had plenty of vino and danced the night away with everyone.

All I can say is that it was an incredible evening! 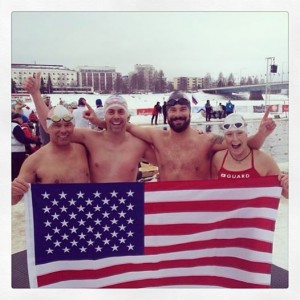 Today we had the 4 x 25m freestyle relay, and the order went Cristian, Brad, Melissa and I (pretty much anchored every relay in my career, so this was pretty normal). We surged to a strong start, and I entered the water when Melissa was about half-way across the pool (everyone waited until the last possible second to enter the cold, ha) and I looked behind me as she sprinted in for the relay takeoff point. I took off in a hurry, and before I knew it I was at the other end – one glorious cold stroke at a time! We all got together and took more pictures, and again, wedged into the tiny hot tubs and basked in the glory of the wood-burning hot tubs, as we all sang, joked and enjoyed our company! The closing ceremonies had several ‘interesting’ presentations (they love Angry Birds here) by the Belgium and Finnish people, with a final closing from Santa Claus himself before the official flag was passed to the Russians as they began their preparations for the 2016 event! What a truly marvelous weekend of ADVENTURE!

With love and respect from Rovaniemi, 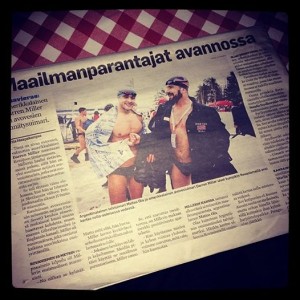 One thought on “‘Take Off Your Clothes. Get To The Water’”